This is wildly off the subject but I didn't realize that today, June 3, was Allen Ginsberg's 85th birthday. I found out through Peter Hale's terrific blog, The Allen Ginsberg Project, subtitled, An Allen Ginsberg Gallimaufry, a word I had to look up—"a confused jumble or medley of things." But his blog doesn't seem confused; it has a point (and good photos) and that point is sharing facts and wisdom of the Beat Generation and of everything and one who was spawned from the gluttonous, gymnastic, gyzym of Ginsberg's genius.

So what got me there? I was searching for a picture of Carl Solomon and what his true role in HOWL, to whom the third section is dedicated, was. I noticed that his Wikipedia page was recently updated, so he still means something to someone, or perhaps to many. He was a crazy sonofabitch but as sane as Ginsberg when they found each other in the sanatorium. They remained friends until the end of Solomon's life. Carl Solomon and Allen Ginsberg at the West End Bar, 1978,
(photo found on Peter Hale's blog)
Spanning the great divide of being in NYC with being back in LA is sometimes hard to do. For the first few days when I'm back, I feel numb, dumb, lacking in energy. But what peps me up is finding something that, no matter how distant, bridges the gap between both cities. Rereading Ginsberg's HOWL, the section for Carl Solomon, that speaks so holy and wholey of NYC, woke me up again.
My own HOWL woke me up yesterday, early morning. First the crows making a racket on our railing, then caw caw cawing overhead; 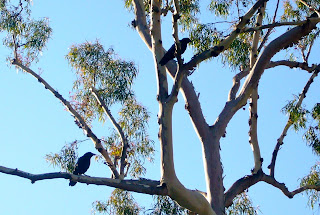 Crows overhead
Then a swish and movement in Thea's backyard: 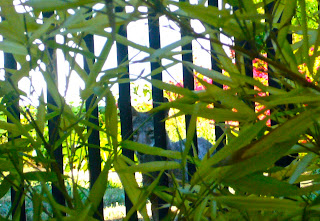 I snuck outside along the walkway between our houses, and saw my old neighbor Thea putting two plates of food down on the ground next to the canyon, and a second later, a coyote cautiously approaching... 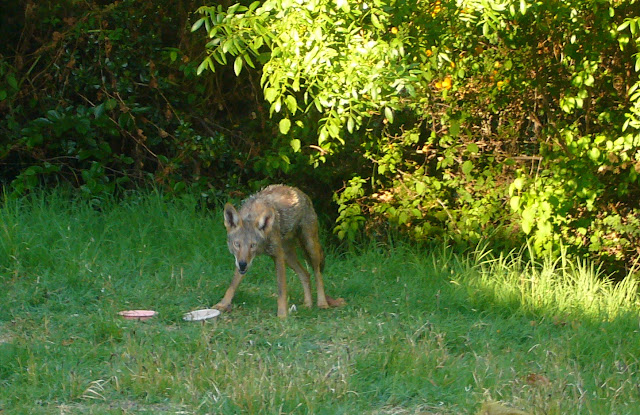 I would say with almost certainty this is the same coyote I saw in the canyon at this time last year, when it was only a toddler. I worried then that Thea might be feeding it, but never imagined she'd be so blatant, deliberately putting out food for it to guzzle down. And guzzle down it did, indicating it's probably dependent on my neighbor—in her delusions of goodwill and ignorance—for the food it eats.
...but I freaked it out! 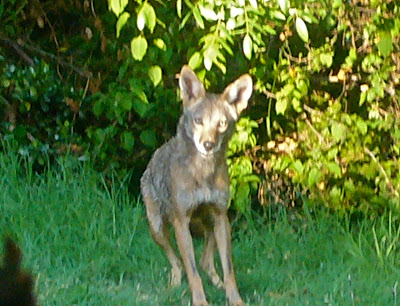 Freaked out!
It caught me peeking around the corner to take its picture. For the next hour, it filled the canyon with its growls and barks, howls and HOWLS, pursuing me, through the canyon, to the back of my house (how did it know where I lived?) and approaching in its awkward, frightened, vulnerable, sad way.

Do I call animal control? Do I let Thea continue feeding it? What is the right thing to do?

You can hear it's yips and yaps, along with the crows, here:


Posted by Charlotte Hildebrand at 7:07 PM