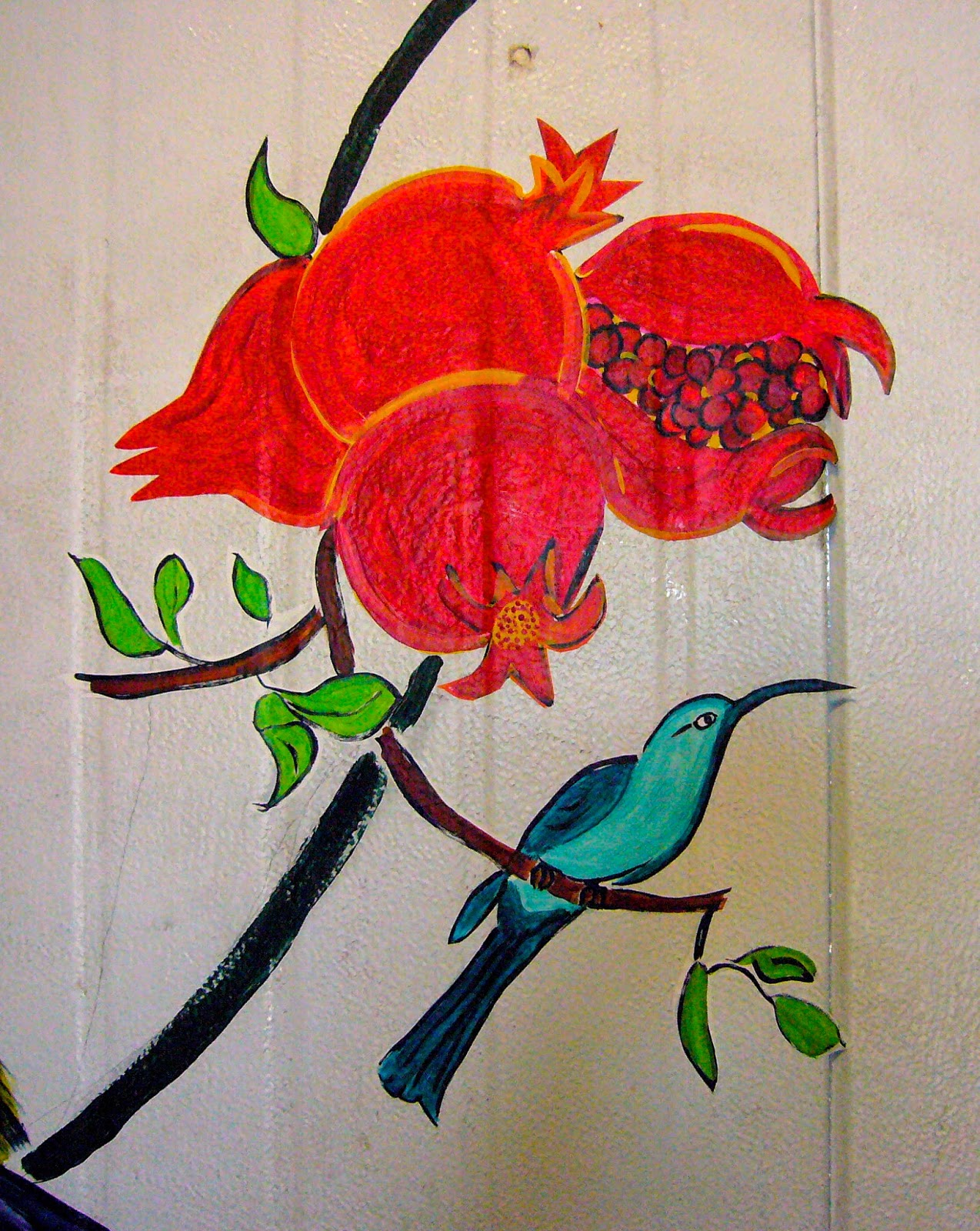 I said I would leave a note here about Good Eggs participation in the Frogtown Art Walk. Well, it's happening. Jeffrey Hutchinson, the floor manager and the one who commissioned my mural, has been working hard to see this come to fruition...and yesterday, the word came. We're on.

There will be more art than you can shake a stick at, local and close-to-local artists will fill the space with dance, music, and art. Please come by and check out Good Eggs.

Time: not sure, but check the website, I see that some things start at 5 and the walk will probably go until 10 or 11. The action is usually along Blake St. but this year Clearwater will have a pedi-cab to ferry passengers to Marsh Park.

And here's a shot of the finished mural, at the entrance to Good Eggs. It doesn't have an official title, but I'm calling it "The Frogtown Bird Walk." 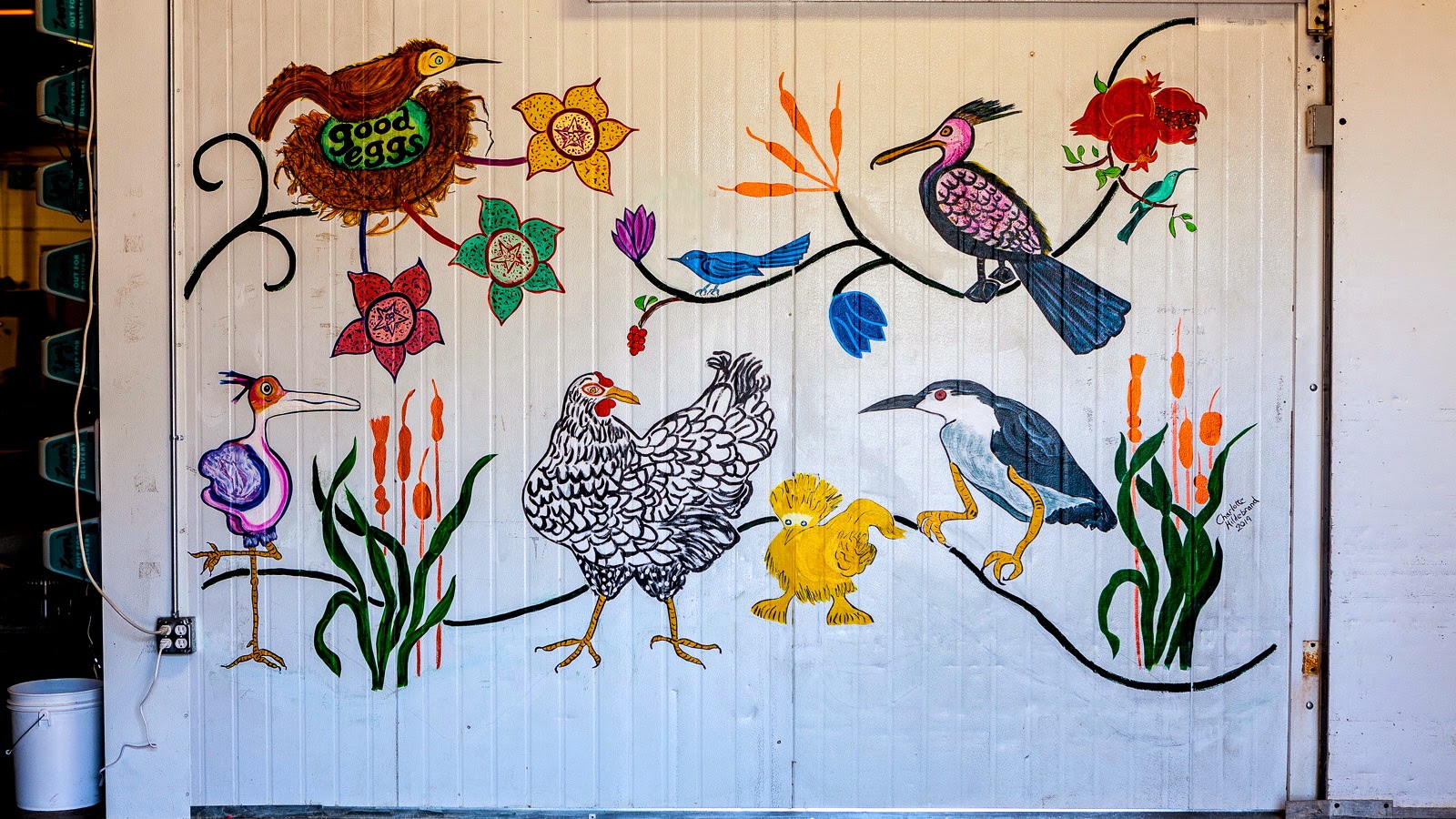 
Posted by Charlotte Hildebrand at 8:40 AM 2 comments: 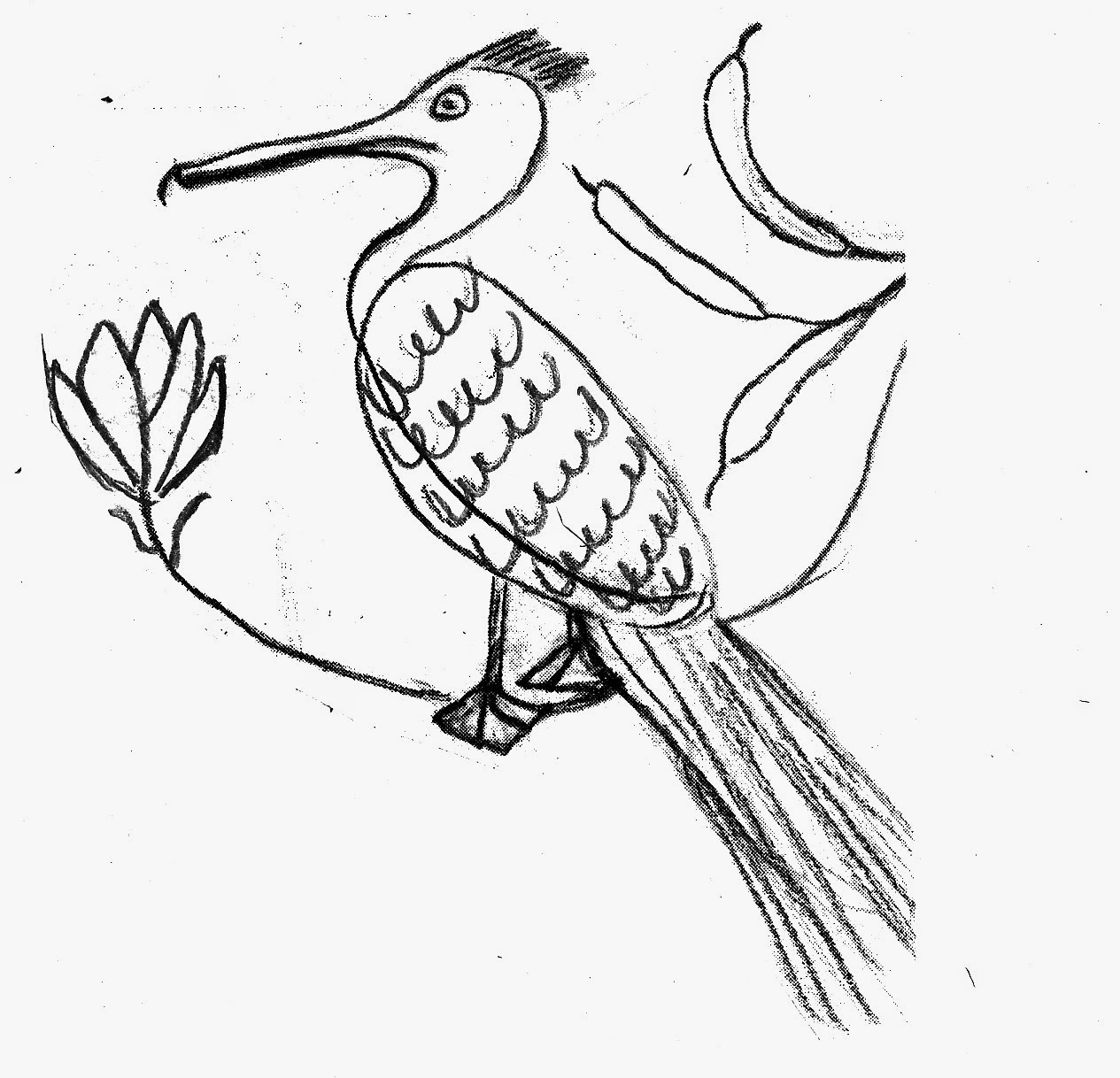 This is what happens when you freak out and have no confidence in yourself. You make a long list of everything you need to get through the day, pack your car and rush off in a flurry, but you forget your purse, and since you're not so far from home, you do an about face into the gas station, making a sharp turn, but what you haven't calculated for is the curb (you swear it wasn't there last week) and hit it, BOOM, slamming your tire, but you're still freaking out so you don't notice it's flat until passersby point at it with worried expressions, and so, you stop right there, realizing you have brought this on yourself, freaking out and such. 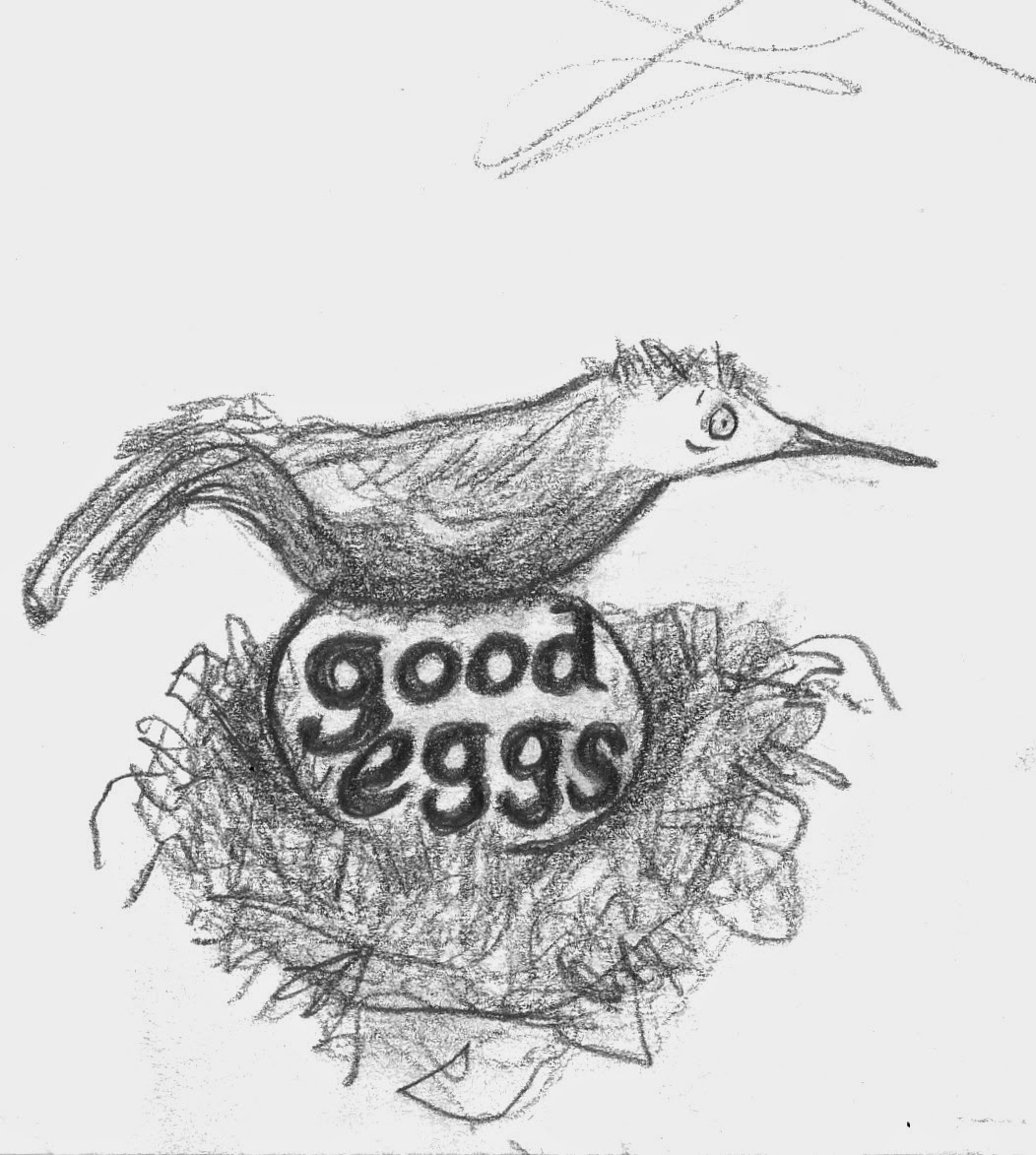 It's hard to calm down when you've worked yourself up into a state, but you must, otherwise you're lost, so while your husband drives down the hill, you sit there and meditate. Not very successfully. Okay, not at all. 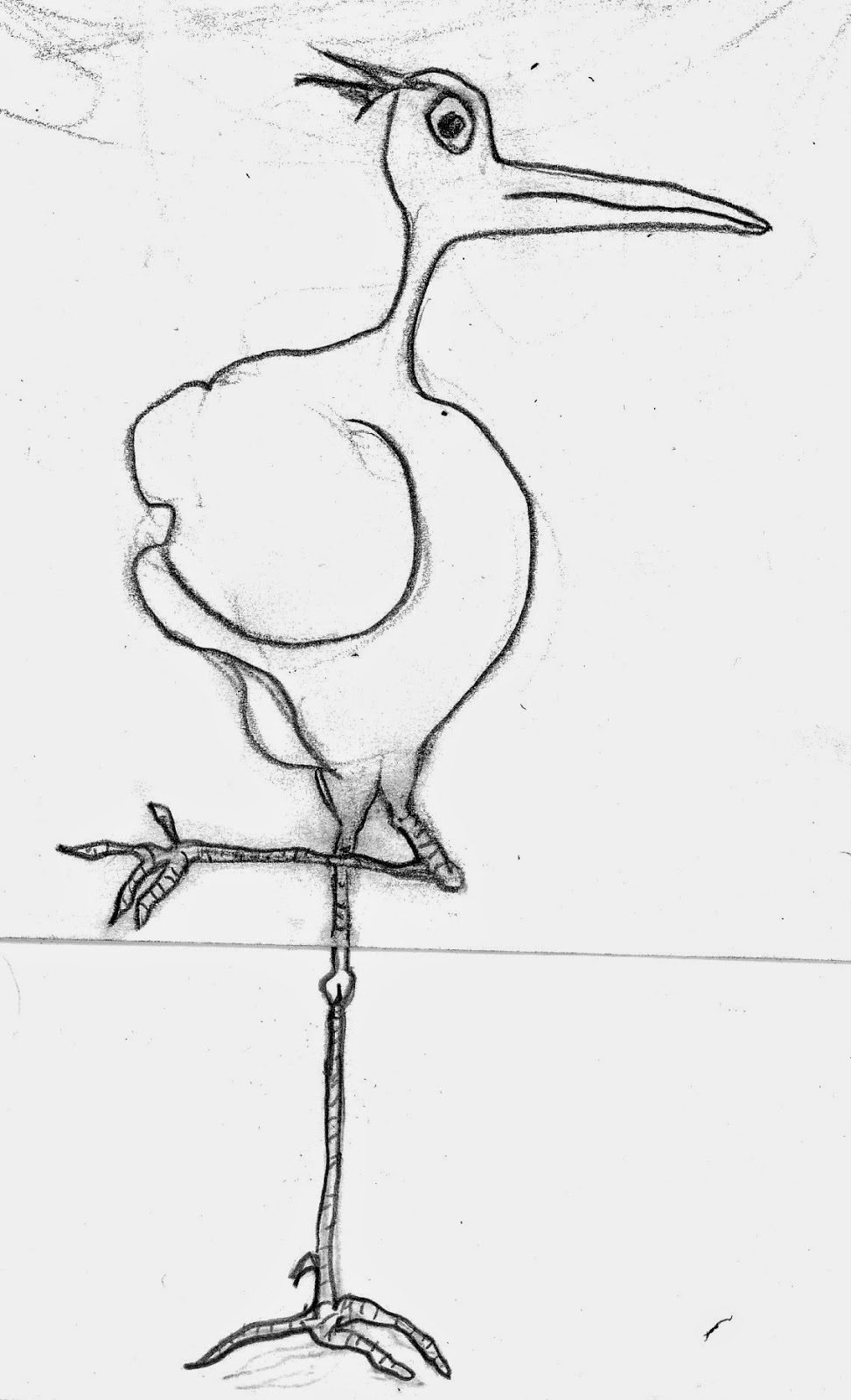 I don't know why I was in such a state but I'd been working on a mural for Good Eggs for a month, and now it was done, which meant finally taking it out of the studio and putting it up. But instead of feeling good about it I felt anxious, anxious that somehow it wouldn't work. But after I busted my tire, left my car behind, drove Tom's car to Frogtown, I met with my art pal Margaret, who is full of positive energy, and we laid out the mural and pasted it up. The day went quite well actually: nothing fell from the sky, the paper didn't disintegrate, nothing dramatic happened. Other than frying my phone and not being able to call or text anyone, everything went smoothly. It was a feeling of great satisfaction to actually see the mural realized. 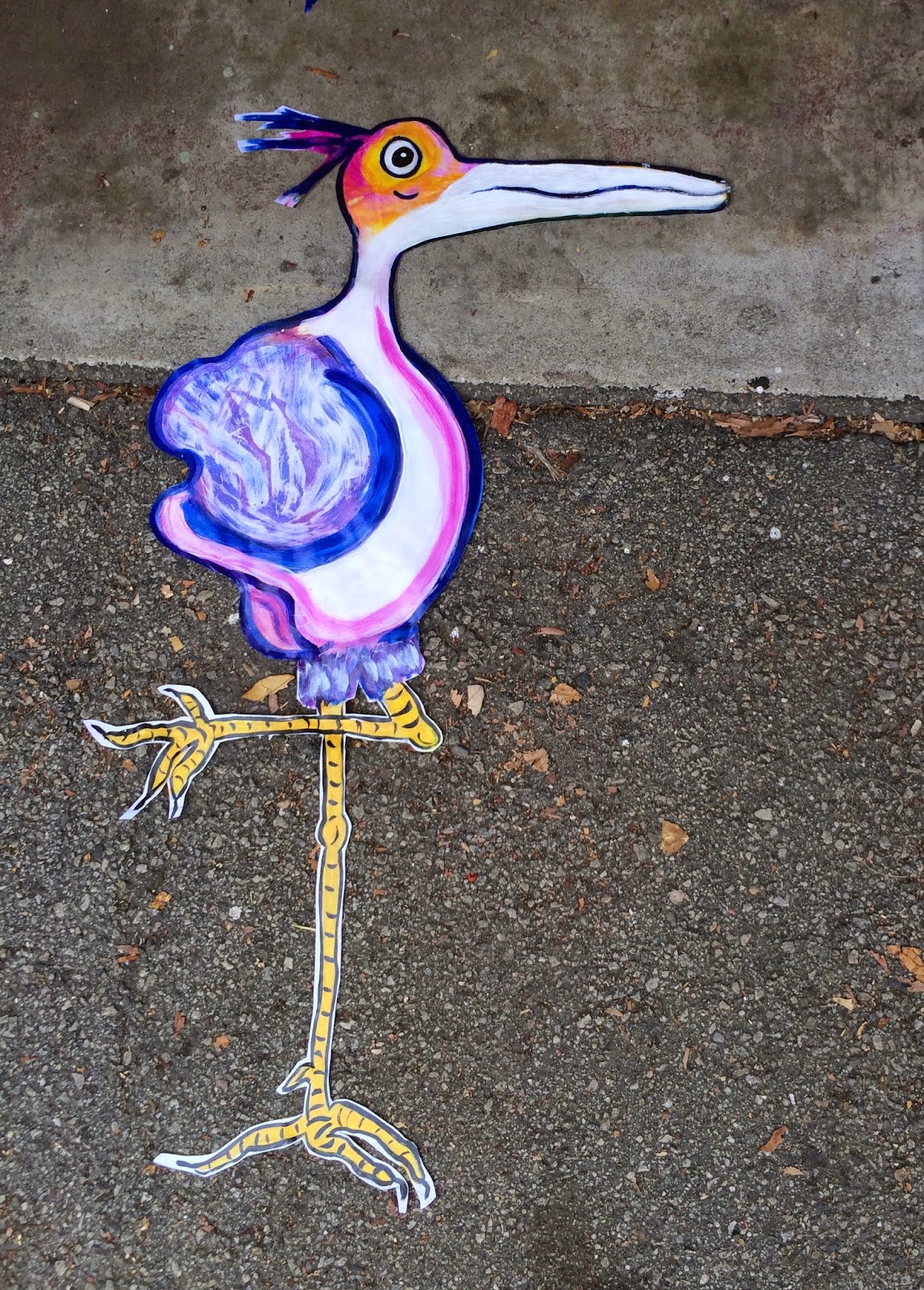 First, laying things out in the driveway 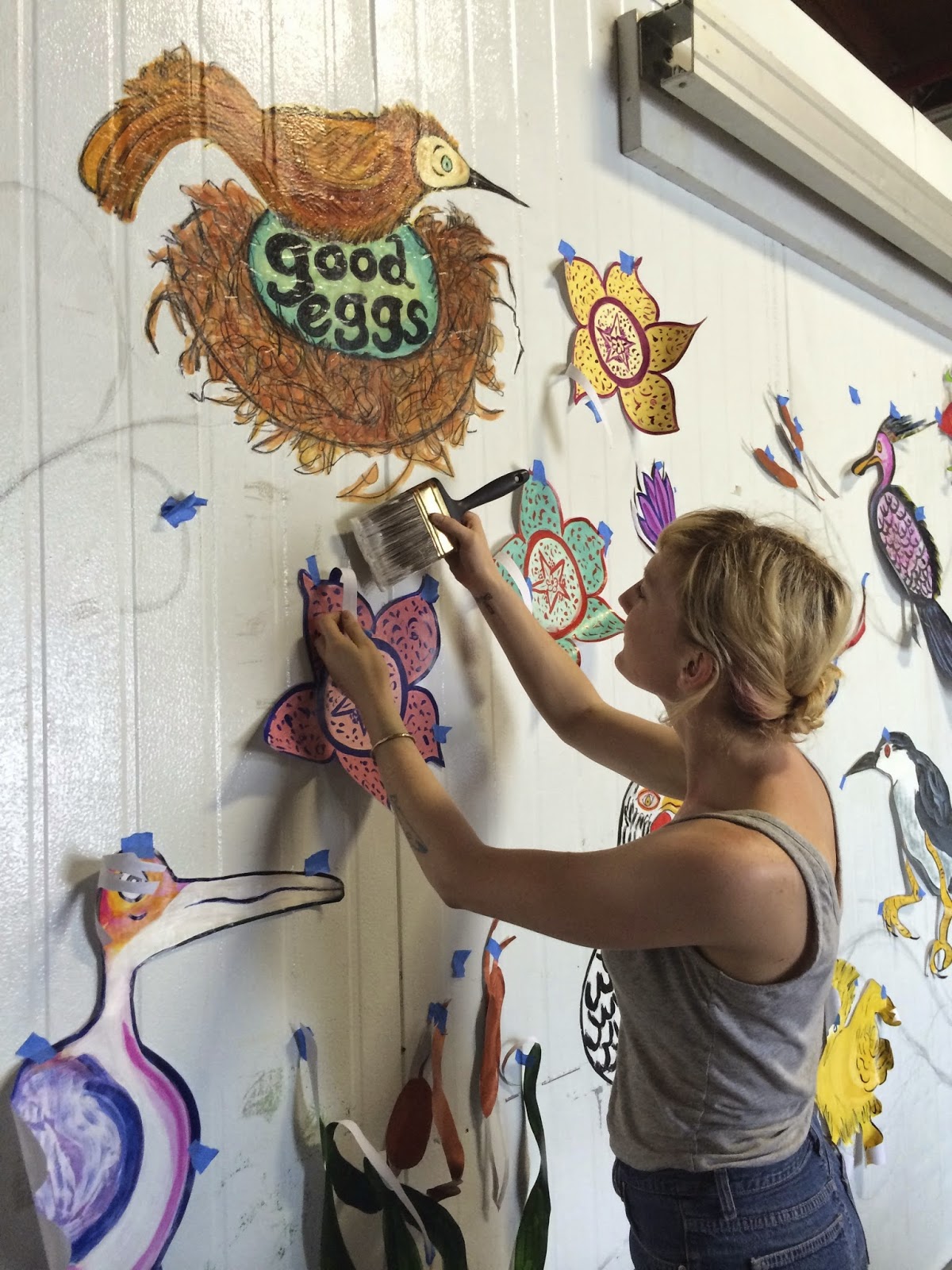 Margaret starting to paste up 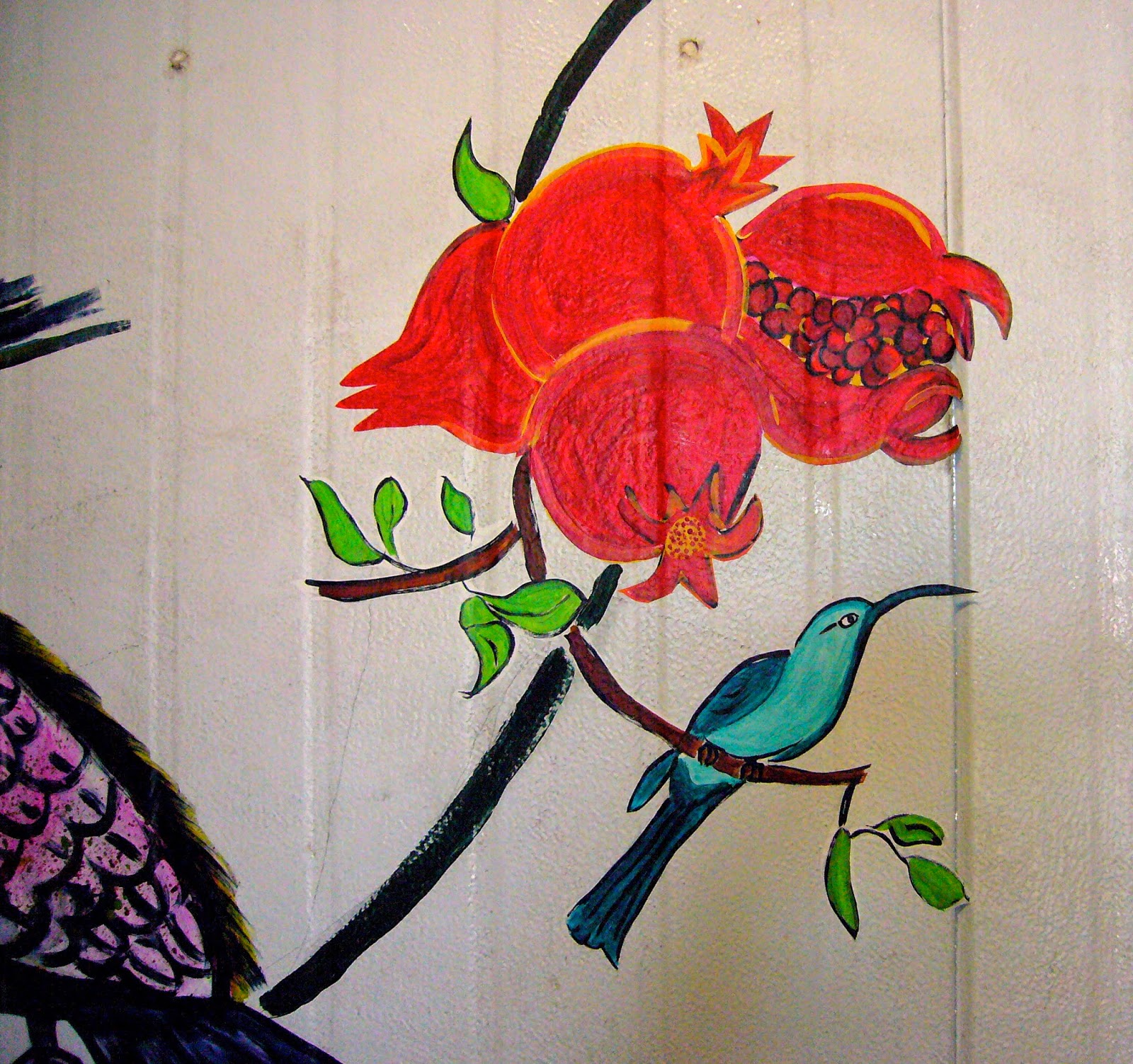 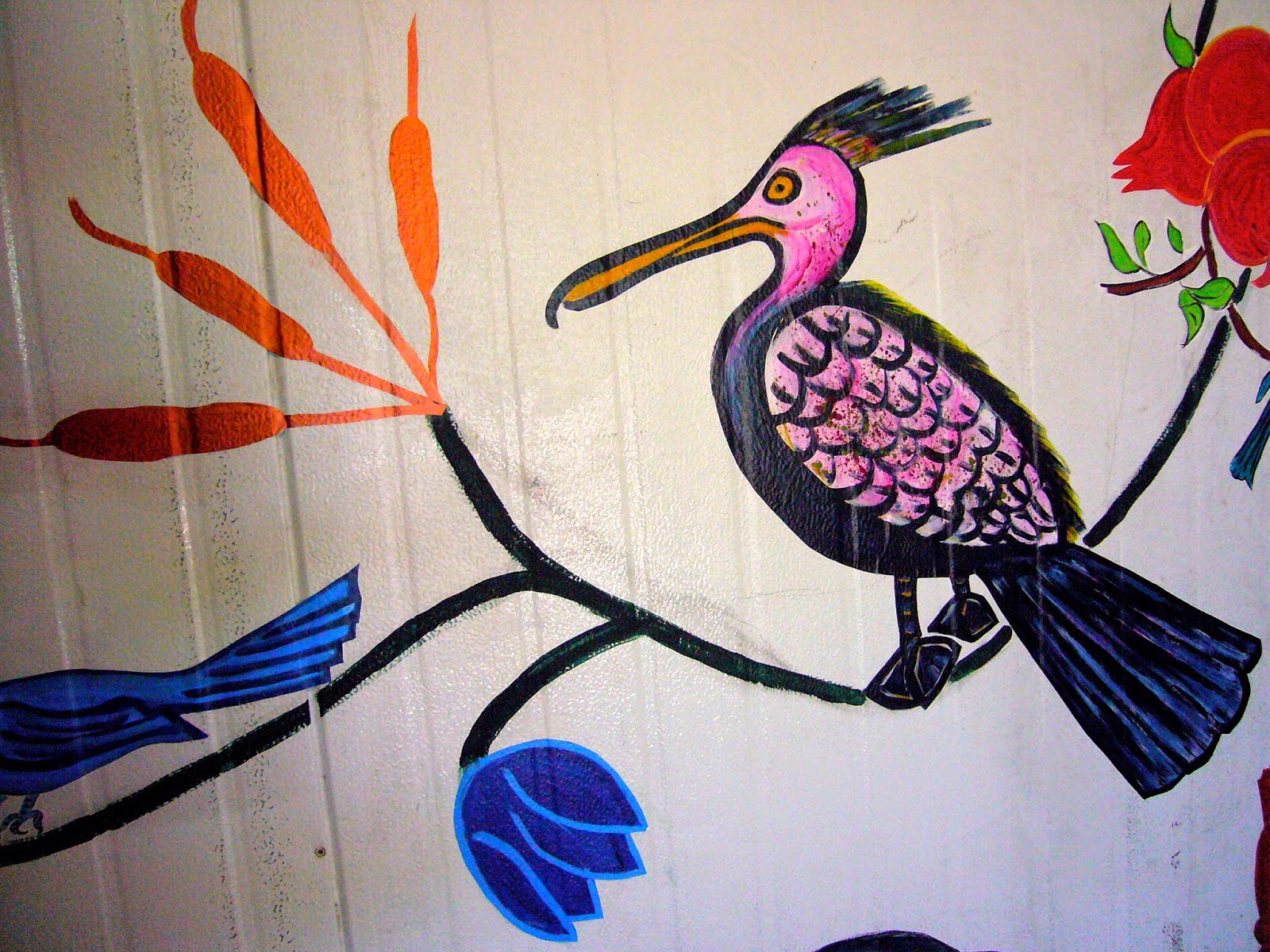 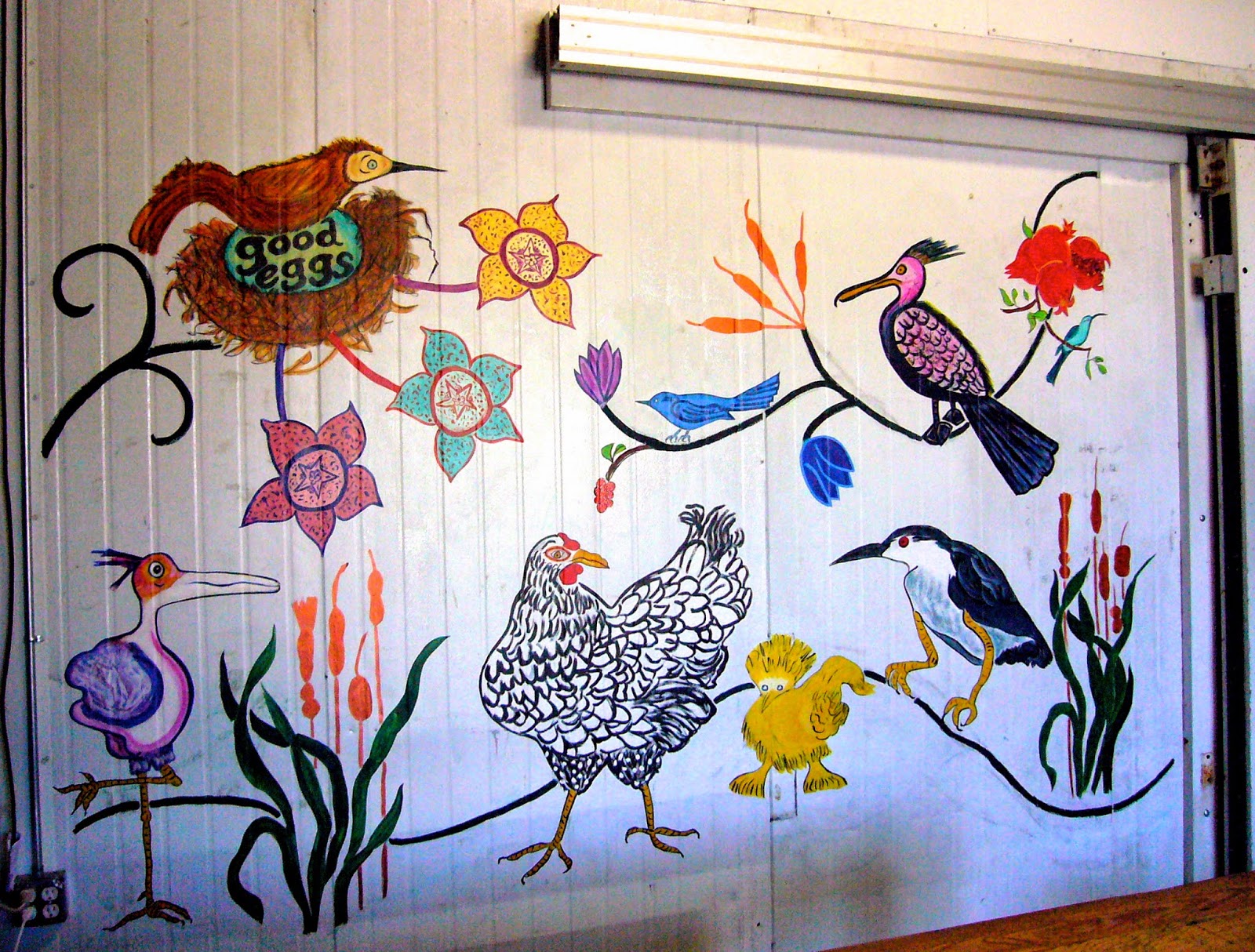 Come by and see the mural in person at Good Eggs, 2760 Clearwater Street, in the old Hostess Bakery building. As of this writing, I'm hoping it's part of the Frogtown Art Walk, but will keep you posted here or through email, lottobrand127@gmail.com. The big sliding door to Good Eggs, which is the entrance, is generally open.


Posted by Charlotte Hildebrand at 9:49 AM 3 comments: