I've gotten so much junk mail lately, and so little real email—where is everybody? tweeting, texting, fbing, email is becoming downright old-fashioned!— that I've taken to reading my junk mail. It's a mishmash of defrauders and entertainers, entreaties and exaggerations, and promises to be made, really a very rich palette if you have half the day to waste.
Well, you know how one thing leads to another, and after hearing author Norton Juster on the radio talking about his book, The Phantom Tollbooth, with sentences that read like this: "Whether or not you find your own way, you're bound to find some way. If you happen to find my way, please return it, as it was lost years ago." which made me look at the book again with Jules Feiffer's illustrations—anything by Feiffer always makes me feel silly, as evidenced here.  So, figuring by Norton's example, the way to find yourself is by getting lost sometimes (in wordplay); therefore and thus, I present my reimagined deleted junk mail here, with apologies forthwith: 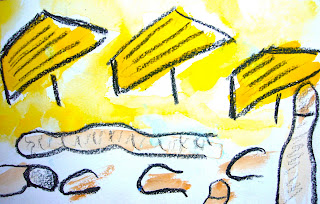 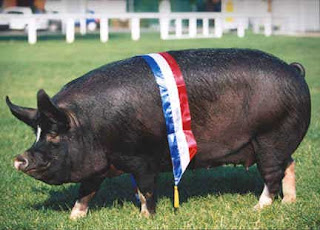 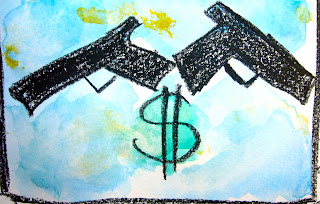 
[READ THIS]
Dear Beneficiary,
Did you get my last email!
Your official payment of 5.5 millions is
approved by World Group Bank
If you have any info about
any one that scam you
forward it to us,
British High Commission (head office)
Fresno, CA
Yours, Faithfully,
Larry Wayne Ellis
[arrested 6/10, jailed Pinellas Cty. FL]
Fix your hips
Replace your claim
Hip replacement fixed claim from Canada
Fly Air Canada! 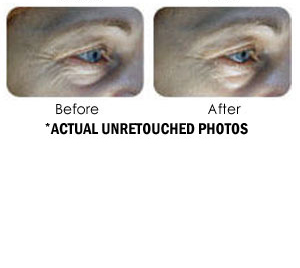 Vitalize and hydrolyze. Wow! What a difference! 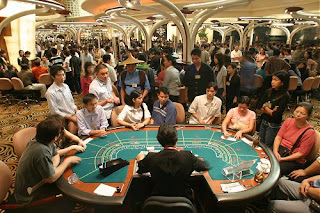 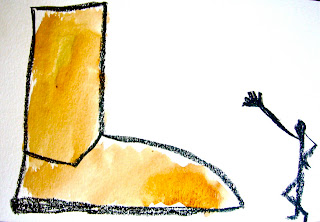 This is the first time in the Rat's Nest's short history that it's been without a rat. What will become of it now that the last rat has passed to the great beyond? One thought is a move to another website, one that won't be as frustrating as blogger (sorry, blogspot.com, you've been good to me, but the lack of control on your site sucks). Reader(s), look for a new link in the coming weeks.
So, Florida. A few weeks ago I flew down to Florida, and heard a lot of great stories about my late father and his brother Lee, who I went to visit. At 98, Uncle Lee's a miracle. Still easy going, still cracking jokes. During WWII, he led an army battalion of all black soldiers across N. Africa and into Europe; came home to run a successful business with my father, was a whiz at numbers, a champion at bridge. Now he has no memory, sleeps upright in a barcalounger, but is as happy as a lark. 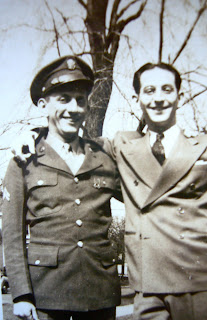 Lee and Sid, Brothers
In Florida, I saw all the cousins, visited my parents' grave, observed the egrets and herons in the drainage ditches along the back roads. The grackles in the shopping center parking lot. The creole Haitian workers. But Florida's a strange place. It's where the 9/11 hijackers, including Mohamed Atta, came to lap dance and drink great quantities of alcohol without being detected; where the Iraqi invasion was broadcast on TVs in Walmart and no one bothered to watch; where young people live in gated communities and old people go to die. But it does have the Atlantic, shimmering and warm. 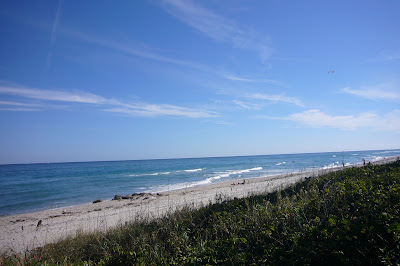 Florida's shoreline
After visiting old friends in Palm Beach, I took a walk along the nearly empty shore. I remembered when I used to walk with my parents in Boca; they insisted on walking three miles of beach to the Holiday Inn and back, even in their 80s. It was the happiest time I ever spent with them. The rest of the time was a dark cloud, fraught with tension and antipathy. When I visit there these days, no parents, no tension. Still I don't like Florida! 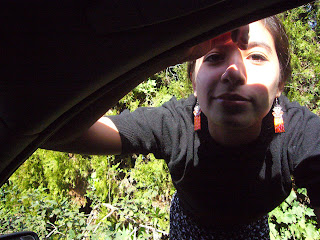 On the home front: Maya left this a.m. for the frigid East Coast, after a month long winter break. Her vacation went by in a flash, with trips to OK and the desert, clandestine parties, lots of time spent horizontal. How will she adjust to the cold, from 70 to minus 10? Here's a picture taken of her in the warm CA sun, as she contemplates a shopping trip with her mother.
Posted by Charlotte Hildebrand at 11:53 AM 1 comment: 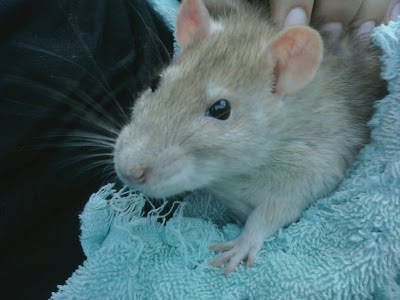 Malka, Oct. 28, 2008 - Jan. 13, 2011
(photo credit: Maya Harjo)
I'll try to say a few words: She was the best rat a family could have. Affectionate, entertaining, brave. She'd always pop up when I came home from work, looking to be taken out of her cage and indulged with sunflower seeds and scratches. In her youth she was a great admirer of newspapers, and later used them to build extensive nests under the couch. When we first got her, I thought we'd made a mistake; she'd dash around with a crazed look in her eyes, like someone was after her. If you tried to touch her, her little body would tense up and she'd run away. But slowly she learned the ways of domesticity and liked being fed bananas in the a.m., kale and carrots in the afternoon. She slept in a hammock and often tried to jump from her cage to the table next to it, landing on the floor with an occasional thump. Her last day, she built a nest under the couch but when she came out of it, she had worsened and we knew it was time. Still it was an impossibly difficult decision, even with her tumors, we couldn't let her go. But, it's weird, they let you know, animals let you know that it's okay, they can deal with it, even if you can't. This was the last picture taken of her and if I must say so myself, she was a handsome, adorable rat, right up to the end.
Posted by Charlotte Hildebrand at 4:00 PM 3 comments:

They came. They went.

The kids were here for a minute over the holidays...and now off to OK with Tom to visit family and enjoy the benefits of having a Cherokee casino on their great grandfather's land. Free admission!
I'm enjoying the peace and quiet—never thought I'd say that. Have I succumbed to that terrible state of decrepitude, where I've gotten used to having no kids in the house? I fought it for so long, but I'm like every parent who's ever lived: accepting the inevitable. You get to see your kids for a bit, and then you blink and they're gone. 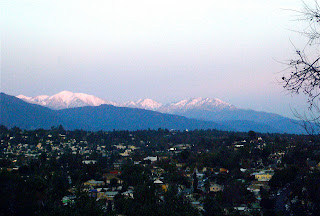 I've been taking a lot of walks around Mt. Washington in their absence. The mountains are beautiful this time of year. 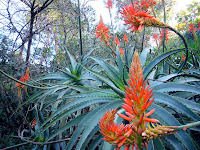 The winter flowers are in bloom.
But I feel like Rip Van Winkle who's woken up from a twenty year nap. I'm surprised at how old the inhabitants of this hill have gotten in the time I was last down here (usually I walk up the hill, this time I've been walking down). The schizophrenic, the gangsta, the professor: they've all aged since I last saw them. What happened? What year is this? Was I, Rip Van Winkle, asleep perchance?

The schizophrenic, who probably isn't as ancient and brittle as he looks, is skinnier and more agitated than ever on his walks around Terrace 49. His hair is salt and pepper and his face drawn tight. He walks with his hands clutched behind his back, and he smokes and drinks a coke at the same time. He's as ubiquitous as the ice cream truck that moves slowly along the street. It rings its bell but no children come. The schizophrenic walks to quell his voices but to no avail. 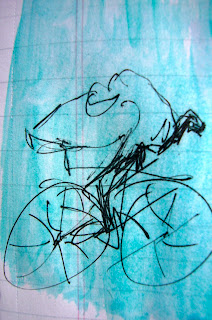 The gangster has aged tremendously. He used to rip through the neighborhood on his bike doing wheelies down Ave. 50, home to the Ave. gangs. Surely he was part of that gang, by his tattoos and baggy clothes. You could see him riding around at any time, night or day, with a gun sticking out of his back pocket. He'd yell and scream obscenities at any disturbance, so you knew to stay out of his way. But in the last few years he's really slowed down; walks with a limp now and the aid of a cane. No gun in sight. His clothes are still baggy, but that's because he's shrunk.
The professor is completely white-haired. I hardly recognized him but I see he's still a neat dresser. His daughter, who's named after a strong tea, had a baby at the age of 16 and continues to live at home with her husband and little girl; the last time I saw her daughter she was running around in diapers. Now she must be at least 8 or 9. Eight years, nine years, that's a long time. Lots of aging going on in that many years.
And I look at myself in the mirror... but let's change the subject.
If you want to read a good book about growing old, I recommend the masterly Walter Mosley and his new work of fiction: The Last Days of Ptolemy Grey. It's a beaut.
Posted by Charlotte Hildebrand at 1:38 PM 2 comments: