I'm lost in Mexico City's Zocalo, going around in circles. The streets are filled with millions of tourists, shysters, salespeople, street urchins, shrunken matrons and to be avoided at all costs, heavily armed policia. It doesn't help that I can't explain clearly in Spanish where I need to be going. I'm close to losing it under the excruciating sun; if I want to keep going, I have to drink some water, I have to buy a hat! I look across from the Cathedral and find water, 10 pesos, OK! Check! I find a hat, the ugliest hat ever made but I'm desperate. 50 pesos, Ok! Check! Following the water lady's directions to Calle Argentina, I'm on my way. I don't care what I look like in my ugly hat. I don't care that I'm invisible, a ghost, walking through this crowd....until I look at my reflection in a car window. Holy Crap! I look ridiculous! 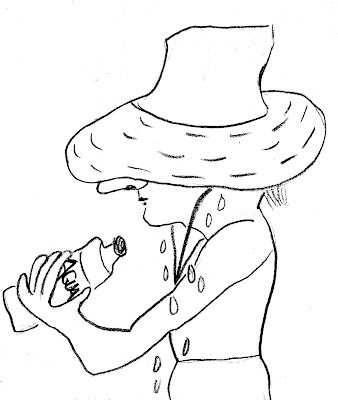 The next morning I'm wondering, what do I do with this hat? I could leave it behind, but Carlos my airbnb host would throw it away. Didn't he say a homeless man lives on the corner of Orizaba and Guanauato? I'll give it to him, along with the rest of my change, which I won't need since I'm leaving tomorrow. I only noticed the man, I mean really saw him lying there, yesterday, after Carlos mentioned he's been there for years, a fabric of the community. He's tucked away next to the hip cafe. When I passed by before my attention was drawn to the customers sipping their drinks, throwing their heads back in hilarity, instead of to the man camped out on the corner.

I run downstairs, hat in hand. The man's perched on his blankets, either darning a sock or fiddling with his fingers. I ask, ¿quieres un sombrero. He seems not to understand, which is totally understandable given my deplorable Spanish. I hold out the hat and he nods. When I pass him later, he's lying back on his blankets with his beanie on his head and the hat on top of the beanie, slightly off balance, reminding me of that children's book, Caps for Sale, where the hats are balanced one on top of the other. 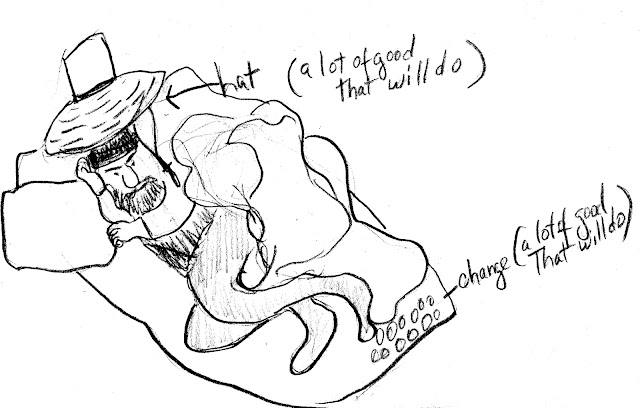 On my way to the airport the next day, I tell the taxi to stop at the corner. I jump out and leave the man a sandwich, but he ignores me....and the sandwich. The hat is gone.


In Mexico my days are normal, I go to Plaza Rio de Janiero in the morning and sketch before I catch up with Maya at noon. The plaza is famous for it's ugly replica of Michelangelo's David. I don't know why, but I love sitting in this plaza observing the daily life of Colonia Roma around this solid, ugly statue. Everyday is different, everyday new groupings in the neighborhood: some days it's the huffers; some days the school children and their nannies; other days the mango sellers and the clean-up crews. I could sit here all day watching. 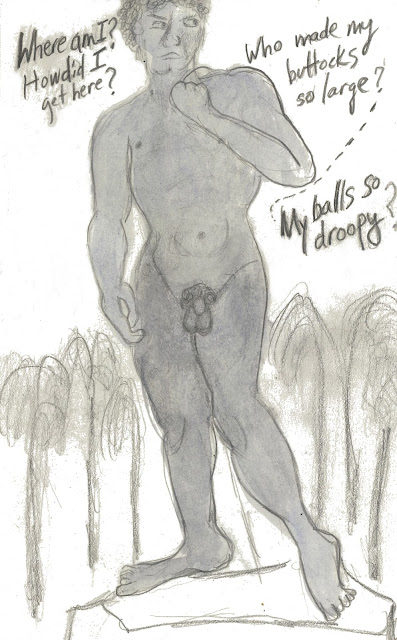 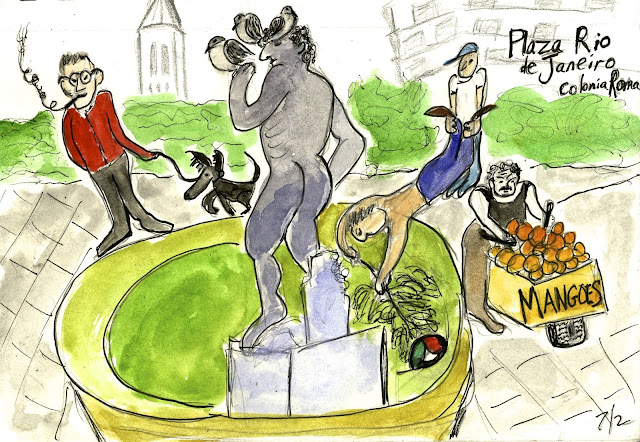 Neighborhood kids retrieving a soccer ball in the fountain 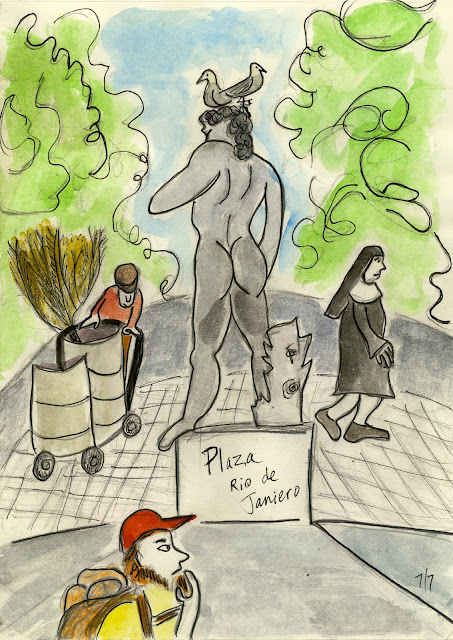 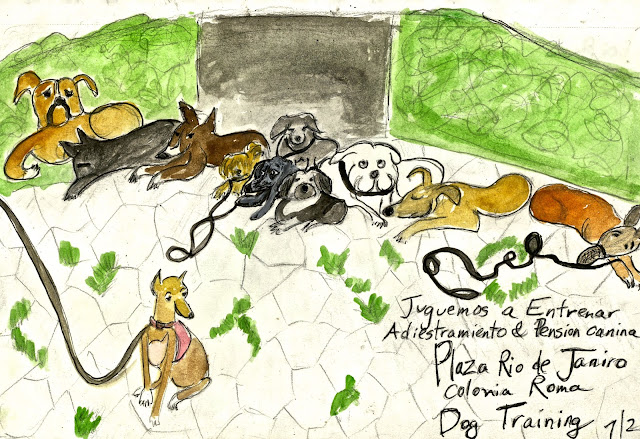 In the evenings, though, my head is filled with weird situations and worry. Remembering my dreams in Mexico is a little like gaining eyesight after a childhood of blindness; it's been years since I've remembered my dreams and now they're coming at me, night after night after night. 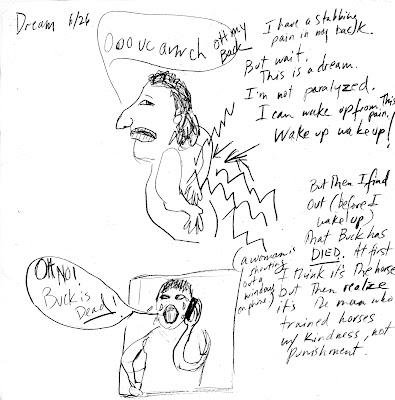 Dream 7/2. John Malkovich engages me in an intimate conversation about Alice's Adventures in Wonderland: 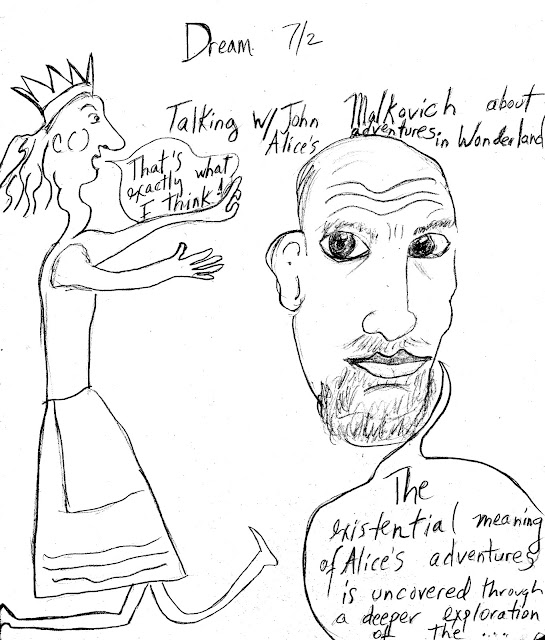 Dream 7/4. Tom and I plan building a house for our children: 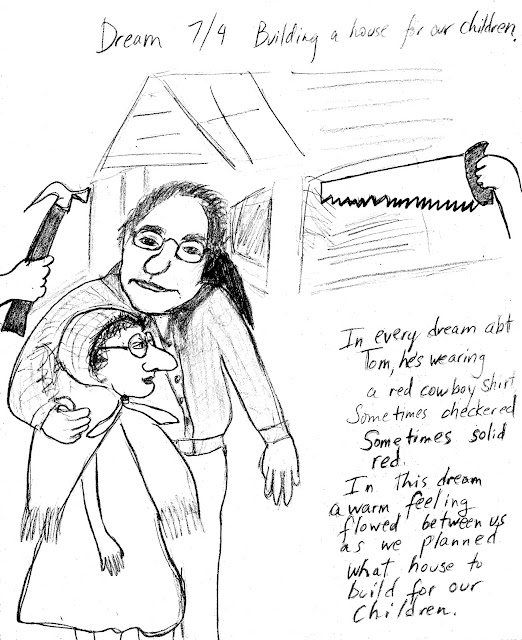 What does this all mean? I don't want to find out because when I do I know my dreams will stop. And...they do.