I used to blog quite proudly about my students. 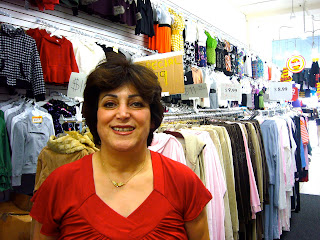 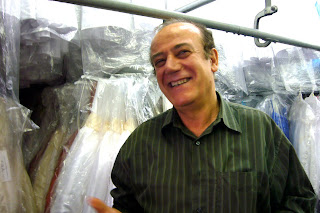 Mahvash (top) and Khodadad
Two graduates in LA's downtown garment district
Lately, though, I've been resenting the fact that they can't or won't learn English. My Advanced ESL students have been here 5, 10, 15 years and still can't write a sentence—or two, and definitely not a paragraph—about their lives.


Perhaps the problem isn't their want of trying, but the geography of Los Angeles. When I worked for Cultural Affairs we spoke of this as "bridging the diversity gap" between communities. But with freeways isolating neighborhoods and lack of public transportation, the bridges were never built and the gaps never filled. Diversity remained in its own quarters. Korean students never need to step outside Koreatown's borders in the mid-Wilshire district. My Persian students can get all their needs met by speaking Farsi in the area called Tehrangles (aka: Little Persia), along Westwood and Pico. What then is the motivation for learning English? 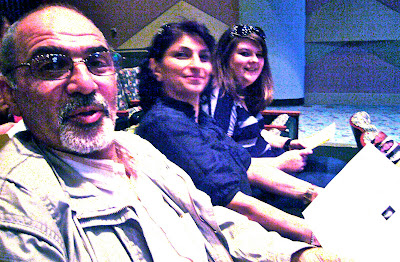 Visiting the Taper Auditorium
Central Public Library
Let me put myself in my students' shoes. They are tired, they are weary, they don't trust the natives: we speak too fast, are rude, don't give them the time of day. Immigrants are what they'll remain forever in our eyes, or until they get their citizenship papers, but even then, nothing changes.

And yes, they're partly to blame—yet who can blame them?—tied as they are to their communities through family, commerce and familiarity. But still... many of them never leave their neighborhoods. They've never visited LACMA, two blocks from school, or Griffith Park, a mile away. The older ones have grown accustomed to their lives, settling for a four-block square. But the younger ones want more. After graduating they go on to LACC, or Cal State LA, or any number of vocational schools. They are motivated to learn English...but perhaps, even more, to learn a little Spanish for their work.


Ah, sigh. My students may drive me crazy with their messed-up English, but I salute them for at least trying.


And Sunny, who just graduated, I will miss you more than most. Despite your size, you were a handful, one of my fiercest students ever. 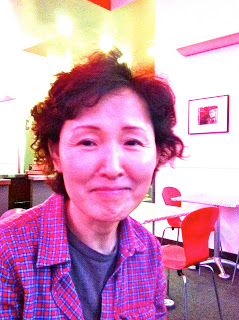 Sunny
at LACMA, on a recent field trip
Posted by Charlotte Hildebrand at 9:42 AM 1 comment:


It's hard not to hear the goings on next door, especially given that my kitchen window looks out on my neighbor's yard. At night I can hear swishing in the bushes as the night creatures make their way to Thea's bowls. In the morning I hear more swishing and tap tap tapping and see the skunks and cats and crows and coyote that come to eat breakfast and dinner.

To be fair, the coyote hasn't been around much this summer... until last weekend. This comes as a relief but not a surprise as Mary Paglieri, a "human-animal conflict consultant" with the Little Blue Society, told me this would happen. She explained in scientific detail how he would eventually wean himself of human interaction (I'm assuming coyote is a he but he could be a she): "Given time, this matter will resolve on its own, the coyote will decide [when]."

When coyote does come around, it's like a homecoming. Thea comes right into the lower yard where the coyote's lying in the grass not more than five feet away. She talks to him and coyote listens, waiting for her to put food into the bowl. Then she gives him her blessing and climbs back up the steps to go inside. Thea is unafraid because the coyote is her friend. He likes skunks. He likes to smell the breezes. He likes the tall grasses in Thea's backyard. He must get sick of coyote life—enough of the urine smells and hard rocks for beds and howling at night.

Coyote is Ferdinand the bull.

Seeing is believing. Here is Coyote as Ferdinand: 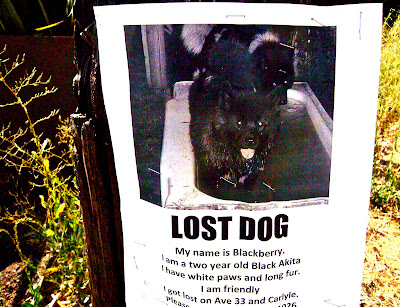 Blackberry, where are you?
Have you noticed all the signs for lost pets lately? Postings started on July 4 and haven't stopped; every telephone pole in my Northeast LA neighborhood is covered with messages of the missing. I was walking this morning at the top of my hill and heard a woman calling, "Lucky, Lucky, Luuucccky?" as she looked for her dog. Right there and then, I resolved never to call a pet Lucky. Once I saw a sign for a lost parrot who was blind in one eye, had a busted wing and a nervous condition that required meds. That bird was called Lucky too.

Talking about lucky, I feel extraordinarily lucky having my daughter home for a week before she goes back to college.

On Thursday, I drove up to San Luis Obispo with my old friend Hudson, which got me halfway to seeing Maya who'd been away all summer. That night we stayed at the Peach Tree Inn, a throw back to the sixties, and ate at The Range in Santa Margarita (a small restaurant in the middle of nowhere that deserves an enthusiastic 5-stars!). In the morning, we explored the Mission San Luis Obispo de Tolosa, founded by Junipero Serra in 1772, the fifth California mission to bring the Catholic faith to the area's native inhabitants.

The mission's sanctuary branches off into an "L," and as we walked around I wondered about its odd shape. Did Spanish landowners pray in one arm of the "L," and Indians, out of sight, in the other? A little museum sits off the sanctuary, with numerous Indian and Spanish artifacts, certain evidence that native peoples' mission life wasn't pretty; those that survived were forced to give up their language, their religion and their freedom. In the early 2000's, a local artist painted the sanctuary walls with an array of decorative birds and flowers, a beautiful whitewash over a cruel, earlier history. 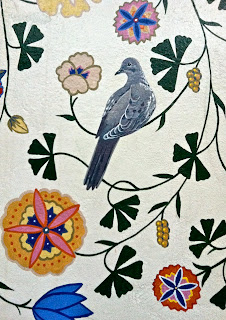 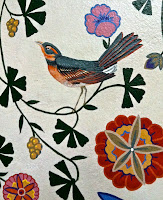 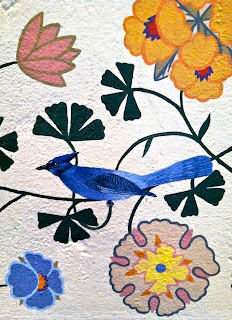 The next day I said good-bye to my friend and drove to Oakland to retrieve Maya at Mills College. Here are a few highlights of the trip:
Seeing Maya for the first time in 7-wks and hearing a mellifluous, fluid French spill out of her mouth!

Seeing Mills again, one of the most beautiful campuses in California.

Bakesale Betty's: What looks like a pop-up storefront is the wildly popular eatery in the Temescal and Telegraph Ave district of Oakland. Food constructionists whip up fried chicken sandwiches with spicy coleslaw or the vegan version with fried tofu, and strawberry shortcake, on a daily basis. The bake goods are out of this world. 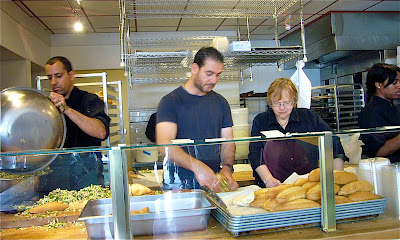 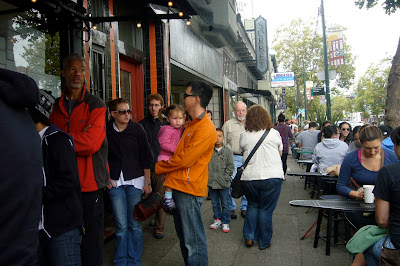 Outside, long lines waiting for Betty; notice the ironing board tables.


Telegraph Road: There's so much on this road to recommend; I was eager to go back to the Restaurante Dona Tomas, but we ended up at Lane Splitter's Pizza and Pub. Maggie, who'd come over from San Fran to spend the day with Maya, joined us for lunch. Maggie and Maya hadn't seen each other all summer and watching them giggle and chatter was half the fun. Here they are letting me take their picture: 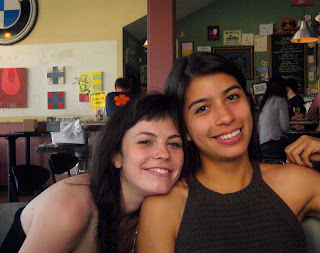 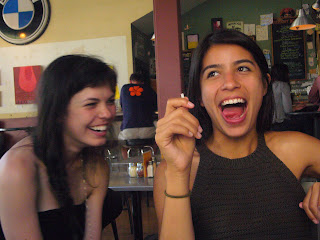 It's wonderful having Maya home for a week, but then she goes away again. (and again...and again...) I'm used to it by now, or maybe, it's just that all my defenses have been shattered. It's still not easy to see her go.
Posted by Charlotte Hildebrand at 4:45 PM No comments: